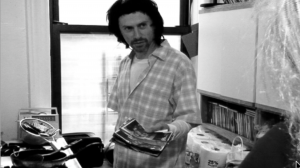 I did n’t know or maybe have the confidence to try acting until later in my career and fell into it with my friends and collaborators Greg (DeLiso) and Peter (Litvin) who were making small silly shorts that suddenly grew legs and became the funny monster called Hectic Knife. One day I turned up in the music studio where I recorded with Peter and he took a look at my reflective cycling gear and asked me to try on a wig and ‘say-shome-shit’ so I did and the character ‘Link’ was born – the room mate of Hectic Knife. At first I really found it excruciating to look at myself acting but as the project developed and the character became less me and more him I began to enjoy it more. A bit like listening to your own voice – some people don’t like how they sound but it sounds fine to everyone else. Supportive words from director and producer certainly helped.

And so that’s where I really started in Hectic Knife. I am not counting the summer play in the French language school I attended where I came on stage muttered and fell down. It may even have been in French I’m sure no one knew what I said anyway. My shy speech as a kid sounded something like – “Hmmunnan Hummnahhaa. I had talcum powder sprinkled in my hair to make it look grey and some wrinkles added with eyeliner – little did I know that by time my next acting part came around I would have developed my own salt n pepper look. 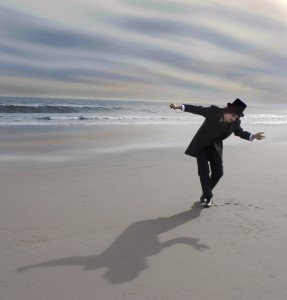 Next main part was as the poet Edgar Allen Poe in a continuously developing web and art series. In May 2013 we visited the actual cottage to do some shooting and reverence the memory of the great artist himself.

It is the master work of my friend and artist Ms Blue Bliss and more can be found on PoeMystery.com

I create Art and one of the most powerful if not THE most powerful is TV. I am Producer, Director, Editor Star of own show on BCAT TV Brooklyn NYC Skills:
trained and practiced in set up and use of TV studio, Control room and Equipment. 1 Show per month going out on web and in Brooklyn. 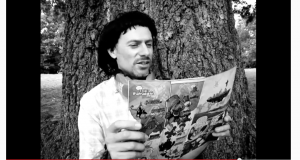 As LaughJohnLaugh in
“Did I leave the cubicle (or did the cubicle leave me?)
https://www.youtube.com/watch?v=mWoy-AIzXMU

Munnelly ‘sleighs’ at the Christmas Show

Scroll back to top